South Africa's farming community took to the streets in their thousands across the country in a French-style, peaceful protest, to highlight the increasing numbers of farmers being killed in rural areas where police resources have been reduced
Sean Osterloh 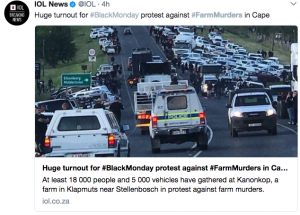 Protests have taken place across South Africa today to highlight the increasing number of farmers being killed during attacks on their farms..

Action was peaceful and reflected the way French farmers protest with vehicle convoys taking to the roads, slowing traffic. Huge numbers of people wearing black came together to pray and peacefully demand improved protection not only for farmers but for millions of people in the country, which has one of the highest murder rates in the world.

Cape Town, Pretoria and Johannesburg were the main focus but there were protests across the country that – at midday – had taken place without incident and was widely covered on social media under the hashtags #FarmMurders #BlackMonday.

The unprecedented protest followed an emotional appeal last week by farm manager Chris Loubser in which he pleaded with South Africans to stand together in support of the cause and wear black clothing on Monday.

He spoke following the murder of his colleague and friend Joubert Conradie, shot dead at his farm in the Klapmuts area in Stellenbosch, in the west of the country.

Thousands of people wore black to highlight the issue to government, who have been accused of ignoring the problem and not allocating sufficient police resources to rural areas.

Some farmers leaders warned the attacks threatened food security in the country. It always ran the risk of inflaming racist tensions in the country with some black activists labelling it a white protest, despite the industry association AgriSA saying farm attacks are an issue for farmers of all ethnicities.

In a country where two people are killed on average every hour, among a population of 54 million, the murder of farmers is at a higher rate than police officers.

AfriForum and AgriSA have joined the call for all South Africans to wear black next week Monday to commemorate the lives of those killed in farm attacks, which has claimed the lives of 71 people this year..

Presenting the national crime statistics for the 2016/17 financial year last week, Police Minister Fikile Mbalula said he was in contact with the farming community regarding farm attacks, and that the police were implementing a rural safety strategy.

Mbalula said he had met with farmers’ organisation AgriSA, which he said was also using its resources to help with rural safety. “I don’t want to argue with people about rural safety,” the minister  was reported as saying.

He said while the reality was that there were people who were racist, “there are farmers who are patriots in our country who need safety and support from the police”.

AgriSA president Dan Kriek said farm attacks and their brutality must be strongly condemned by all South Africans.

“We think of the thousands of fellow South Africans who have lost their lives during the past year as a result of violent crime, 52 murders a day. Many farmers and farmworkers count among those who have paid the highest price,” Kriek said.

IN PHOTOS: #BlackMonday in South Africa

R59 NEAR VEREENIGING BLOCKADED IN PROTEST OVER FARM MURDERS

« Food prices in South Africa up 3 per cent year on year » Is this the solution to the lack of machinery holding back Africa’s small farmers?