Profits soar for supermarkets in South Africa, which have doubled liquor outlets in five years 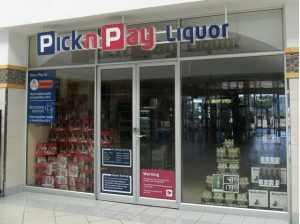 The number of liquor stores operated by South Africa’s three largest supermarket groups has almost doubled since 2012 according to a report out this week.

Shoprite, Pick n Pay and SPARhad a total of 1,329 bottle stores, from under 900 at the same points in 2012, according to moneyweb.co.za

SPAR is the market leader, both in terms of number of stores and retail turnover by Tops at Spar  – it had 896 stores in the Southern African region at the end of March this year and logged retail turnover of R9.4 billion ($690m) in the previous 12 months, 9 per cent up on the previous year, according to the report.

SPAR noted in its interim results, however, that “retail turnover growth [was] affected by aggressive competitor entry into market”. This is a direct reference to Shoprite, which in the last year opened an average of one store a week.

Soprite’s liquor business, of 216 LiquorShop and 160 Checkers LiquorShop stores, grew turnover by 22.7 per cent to R4.8 billion ($352m). Shoprite operates a further 13 stores in Namibia and one in Lesotho. In the last five years, its  liquor outlets in South Africa has increased 132 per cent with  sales growth is running north of 22 per cent, with what the group terms “an exceptional return on investment”.

Fewer than half of the group’s Shoprite SA supermarkets have a LiquorShop trading nearby. But, in the case of Checkers, two out of every three supermarkets, including Hypers, do. One seldom sees a new Checkers store open without a LiquorShop attached these days.

Pick n Pay does not separate retail sales by division as it defines only two segments: South Africa and Rest of Africa. However, the group said its liquor business grew by 15 per cent in the 52 weeks to February 26 2017, “with solid market share growth across a number of key lines”.

Massmart’s Game business has also entered the retail liquor market alongside its push into food (especially fresh). The offering has been rolled out to 40 of its approximately 120 stores in South Africa. It says food and liquor makes up about a quarter of Mass Discounters’ turnover, meaning that together this is a R5 billion-a-year business.

Consolidation of the formal liquor retail market is certainly taking hold, with the number of independents visibly dwindling in metros, cities, towns and outlying areas, concludes the report,

Beyond these larger groups, there are three other players at scale: Overland (franchise) at just under 300 outlets, and Liquor City (franchise) and Blue Bottle (buying group), each with just under 250. Wholesale Ultra Liquors operates around 60 stores, with some smaller regional groups in the Western Cape, Eastern Cape and Kwa-Zulu Natal.