How restaurants expect to operate under ‘advanced’ level 3 lockdown

A number of businesses would be able to reopen under an ‘advanced’ level 3 lockdown, including sit-down restaurants, says small business development minister Khumbudzo Ntshavheni.
Saki Magoxo

In a number of interviews this week, Ntshavheni said that the decision to open sit-down restaurants again after nearly three months of lockdown, is necessitated by a lack of relief funds to support businesses in the sector.

“The impact on the economy was severe and we went to cabinet after the survey was done and said we don’t have enough relief measures to support small businesses.

“We are better off supporting businesses as they come back to the economy because now you are dealing with the viability of businesses,” Ntshavheni said.

The Restaurant Association of South Africa (Rasa) estimates that restaurants employ around 800,000 people in South Africa, with these employees being some of the hardest hit in South Africa.

Speaking in an interview with 702 on Wednesday (17 June), Rasa chief executive officer Wendy Alberts said that an announcement from the government is desperately needed.

“We are completely decimated. Our industry is long past crippled and we have been calling out to the government for a very long time.

“We have pleaded with them and asked them to let us know what is the ‘formula’ and the norms and standards document that you used to open up churches, schools, shopping centres and supermarkets.

“All we want to know is what is included in that document that has allowed you to proceed with that safely and not let restaurants to open.”

Alberts said that she believes the opening of restaurants is now ‘very near’ in terms of the country’s move to an ‘advanced level 3 lockdown’. 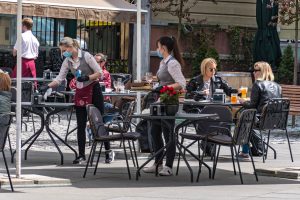 Alberts said that the industry will not survive if restaurants are forced to stick to the same guidelines as churches which state that only 50 people are allowed into a building.

“We have got some restaurants that have got outside seating areas of 1,000 square metres, so to put 50 people in those environments would certainly damage those restaurants forever,” she said.

According to Alberts, restaurants will want to be able to serve more than 50 people at once. This could be achieved by expanding the footprints of restaurants outside, and strictly adhering to other social distancing protocols.

Rules that the industry is looking at include:

Alberts added that a number of other countries have opened their restaurants for full capacity and provide guidelines for the reopening of the industry in South Africa.

She added that staff and food hygiene are already common-place in the industry so it will be relatively easy to adapt for the coronavirus.

« One-year shelf-stable baked goods? It can be done » Interview with Wendy Alberts of RASA Restaurant Association of South Africa