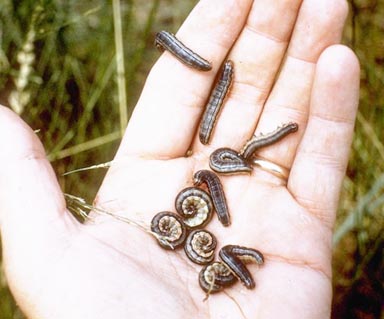 World attention is on Africa as it looks to combat the devastating fall armyworm, an American caterpillar that ravages maize crops.

It was first identified in Africa just a year ago, but has now been confirmed in a series of countries across the sub-Sahara.

Containing the threat is impossible, the moth flies many kilometres to lay its eggs which hatch and, as the name suggests, just marches its way through most of the vegetation. Surviving crops can not be exported.

Maize, a staple food in the region has been the most affected, as well as other cereals including sorghum, millet and wheat.

The ravenous pest is found in the southern sates of the USA and Central and South America and its arrival in Africa, probably through imported food, has alerted Mediterranean Europe and Asia to the spread and means bio scientists from across the world are focused on Africa.

Those scientists this week called for urgent action to halt the spread of the fall armyworm, which already poses a major threat to food security and agricultural trade in Africa. It grows to about 20mm before becoming a pupa and emerging as an adult moth. (continues below picture)

The Centre for Agriculture and Biosciences International (Cabi) says farmers’ livelihoods are at risk and it is now expected to spread “to the limits of suitable African habitat” within a few years.

Chief scientist Dr Matthew Cock told BBC News: “This invasive species is now a serious pest spreading quickly in tropical Africa and with the potential to spread to Asia.

“Urgent action will be needed to prevent devastating losses to crops and farmers’ livelihoods.”

This is the first time the armyworm has been idetified on South African soil after after it was first spotted in Nigeria a year ago. The moth is active in Malawi, Mozambique, Namibia, South Africa, Zambia and Zimbabwe, according to the latest reports.

In Zambia, the Government has already spent $3 million in an attempt to control the pest that has affected approximately 130,000 hectares of crops. However, the full extent of the damage in the country and other affected countries, is unclear.

South Africa’s Department of Agriculture, Forestry and Fisheries (DAFF) has received confirmation that pest infestation to crops across Limpopo and North West provinces was the armyworm.

The caterpillar destroys young maize plants, attacking their growing points and burrowing into the cobs.

“Samples were jointly collected by scientists from the ARC Grain Institute and the North West University. These were caterpillars that had to pupate and emerge as moths before a positive identification could be done,” said department spokesperson Bomikazi Molapo.

Southern Africa is already reeling from the effects of two consecutive years of El Nino-induced drought which saw countries importing maize for the first time.

The pest which primarily spreads through wind dispersal and host plant products, is reported to be still active. The affected countries are also in different stages of assessing the damage to the crops because the outbreaks did not occur simultaneously.